Around 2011, the production of T-90A for the Russian army was coming to an end and a larger number of T-90s had been exported to several countries, some opting for domestic production. Uralvagon design bureau, which after the fall of USSR had assumed the role of spear head tank bureau, developed a new variant to be pitched for both the Russian and international customers of the T-90 MBT. This tank was supposed to be the best variant of T-90 ever designed, with several big modifications, including a redesigned hull, turret etc. It was heavier than the previous ones, but way more capable. It is commonly known as the T-90MS (some claim that a variant offered to the Russian army is designated T-90AM as it would be a derivative of the T-90A, and T-90SM for export, being a variant of T-90S which has been offered for export, often T-90MS and T-90SM have been interchangeably used) Lets have a look at this tank. 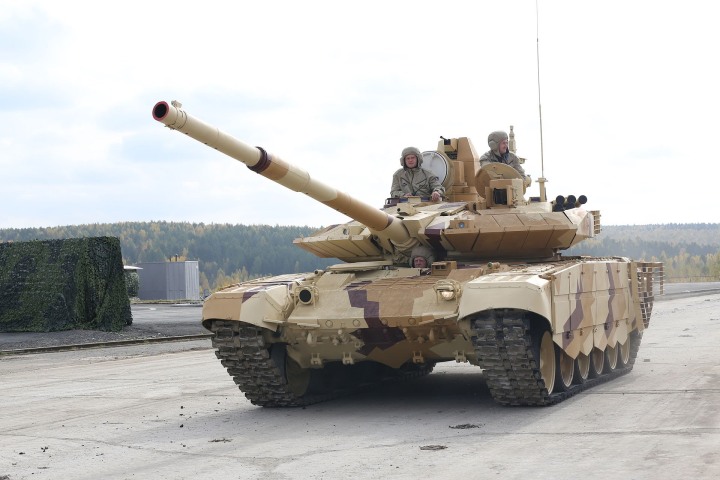 The design of the T-90MS was a radical improvement over its predecessor, ie the T-90A. It sports a redesigned  hull, probably derived from the Object 187 instead of using the hull of legacy T-72B, as it has a flat section behind the sloped frontal edge, this feature was only seen on the Object 187 testbeds and was not opted for the T-90A due to cost reasons, as specified in my previous article. The sides of the hull are now covered with the new Relikt ERA instead of the older and thinner variant of Kontakt 5 incase of T-90A. This greatly increased the hull protection, which in conflicts involving the older T-72, was easily penetrated. The rear part of the hull is covered with slat armor, to pre-detonate incoming rounds, especially RPGs. It also was redesigned to house a new engine and a powerpack, to make up for the increased weight of this tank. 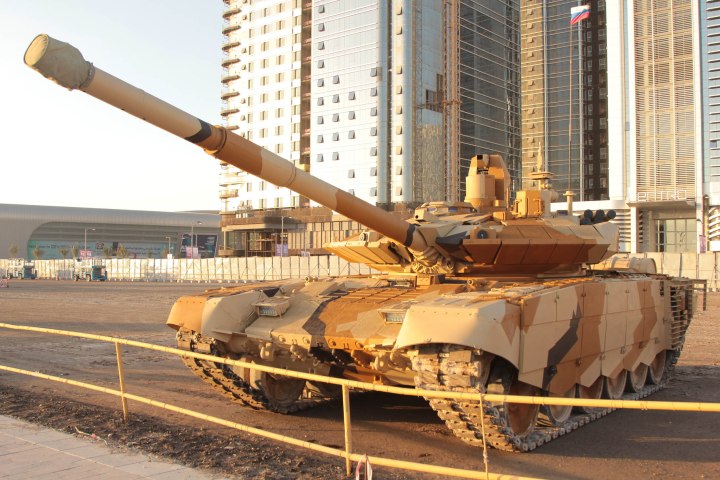 Modified frontal part can be clearly seen in this pic.

The turret also features the Relikt ERA in a new layout over the exiting welded turret, which was derived from the Object 187. The welded turret was considered good enough against advanced anti tank rounds, but the addition of Relikt has further improved the protection of the tank. The sides have also been up-armored, another lesson learnt from combat loses of the older T-72. Turret rear now has slat armor, also sports a bustle, for storing ammo for the main gun. The top part is made up of blow up hatches, which are designed to safely vent the pressure due to the ignition of ammo if hit. This reduces the chance of catastrophic failure, a quality all Soviet origin tanks from the cold war were infamous for. Much of the ammo is still stored in the carousel to be used by the autoloader which is now armored. Again combat lessons played a part in the designs of this section.  Over all, the design is much smoother, a shift from the common rough and tough image of Russian and Soviet designs. The tank is also higher and heavier than its predecessors which is also a shift from the ideology of smaller tanks, which present a smaller silhouette. It is an apt step towards the much larger Armata MBT, which is much bigger than the existing Russian tanks.

Turret bustle, armored hull and the increased armor on the sides can be seen in this pic

T-90MS makes use of the 2A46M-5 gun, a new member of the family of guns which has seen use on the T-64, T-72, T-80 and T-90 tank families. It sports a new autoloader, which allows ammunition larger than previously used, to be deployed on this tank. The use of 2 piece rounds (ie warhead and charge in separate casings) had reduced the overall size of warhead, which in case of western designs equipped with 1 piece of ammo, the sabot rounds can be as long as the entire assembly. The gun is controlled by the Kalina FCS (Fire Control System), which is the most advanced FCS fielded on Russian tanks (until the arrival of the T-14 Armata for obvious reasons). 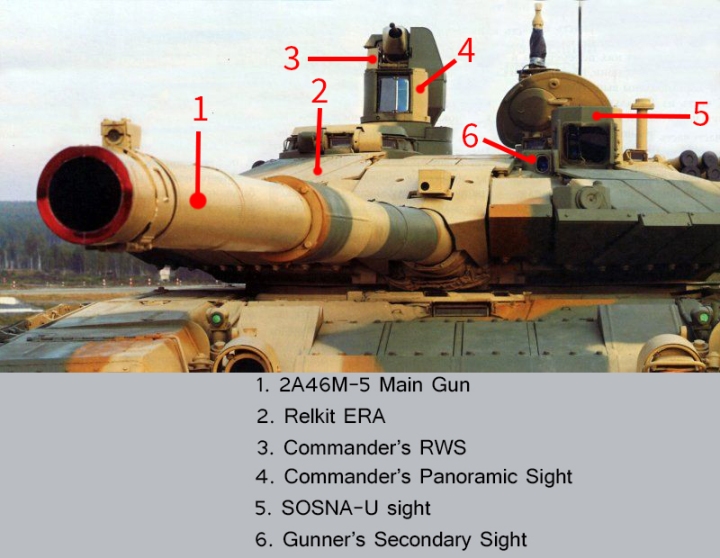 The gunner uses the Sosna U sight, placed atop the turret inside an armored box. It provides a day channel and thermal imagery if needed, along with the range to target. It is also capable of guiding tube launched missiles. Secondary gunner’s sight is placed just beside the primary, and acts as a backup, incase the primary sight is malfunctioning or damaged. The commander however gets a panoramic sight, coupled with a 7.62mm machine gun, forming the commander’s RWS (Remote Weapons Station). The commander’s sight improves the situational awareness, while allowing him to take out soft targets. Secondary armament is in the form of the 7.62mm MG which fires from a port on right side of the main gun. The Russians have apparently dropped the iconic Shtora dazzlers from the sensor suite of this tank, instead using passive jammers for lasers.

The suspension system remains unchanged from the T-90A, but a newer design of wheels has been used. An uprated engine is used to make up for the increased weight of the tank, V92S2F which is capable of 1130bhp. A new automatic transmission is used to transmit power, which takes a considerable amount of load off the driver, however the driver can change the gear as and when needed manually. A new ECU (Engine Control Unit) also helps in improving engine performance by monitoring all of its parameters.

Conclusion–Overall, this could very well be the last variant of the T-90 family designed by the original manufacturer, due to the shift of attention to the more revolutionary Armata family, which uses a single chassis as the base for several vehicles. As of now, there are no firm orders for the tank, either from the Russians or from the international operators, however recently Russian news has reported that the Russian army is looking to upgrade its T-90As into T-90AM standard. It has been speculated that this might be offered as a package for for exiting T-90 tanks in the future, but as seen from the design, it would require a radical remanufacture of the exiting tank turrets and hulls, which would be costly and time consuming, and seeing the nature of Soviet tanks which are known for cheap and easy to use, the package could be very costly for the operators. However, parts of the package might migrate to new T-90s being manufactured, albeit of the older variants, this has always been done in the defense industry to improve the marketability of inferior products.