The nuclear armed south Asian rivals have been at the state of pseudo war throughout the entire time of their existence. They have fought 3 major wars and 1 limited intensity conflict and peace between them is still far away. Interestingly both of them wanted a jet for replacing variants of the MiG-21. It had to be cheap to operate, easy to produce while being a capable fighting machine. Interestingly one nation took the tougher way of developing it alone whereas the other partnered with another country to develop it. In this article we will compare the Tejas and JF-17.

MiG-21 formed the backbone of the Indian air force after its introduction is the early 1960s. It was successfully used in combat and was now being built in India to reduce procurement and operational costs. By the early 1980s, the  MiG-21 fleet was nearing the end of its service life and a big shortfall of combat aircraft was forecasted due to its retirement. Thus a replacement fighter was needed to fullfill the combat requirements of the air force. The jet had to be small so that it couldn’t be spotted easily while being nimble in the air. This requirement was put up after combat experience in the 1965 and 1971 Indo-Pak wars. In these wars, the notorious Gnat had earned the title of “Saber Slayer” for its exceptional record against the F-86. Its small size allowed easy maneuvering while making it a difficult target to spot visually.

The MiG-21 Bison is the latest variant of the Fishbed in Indian service.

India had already developed a jet fighter named HAL Marut in the late 1950s. This fighter was relegated to ground attack role as it was underpowered and had an inferior aerodynamic design. It was thus decided that the replacement for the MiG-21 would have an indigenous engine designed specifically for it. With all this in mind, the Indians started the Light Combat Aircraft programme in 1983, followed by the programme for the engine named Kaveri under the Gas Turbine Research Establishment few years later.

The HAL Marut was designed by legendary designer Kurt Tank who is also known for designing the FW-190.

Thus the fighter was supposed to small while it was supposed to carry advanced munitions to take out a wide variety of targets. The proposed design dictated the use of a single 90kN thrust engine. Several configurations were studied before zeroing on tail-less delta wing design. The advantages of delta wing are listed below.

It also has some disadvantages

Thus the tail less design is justified while the first limitation it solved by changing the shape of the delta wing as done in Tejas. This allowed the jet to have good performance even though its size was pretty small.

The 1980s were tough times for the Indian economy. Just like the Arjun, INSAS and several other projects, the rate of development went southward. The primary customer also changed its requirements time and again thus adding to the existing complications. The Kaveri project wasn’t going anywhere either. They were facing a lot of problems in developing a world class jet engine for this fighter. The Indian airforce procured several fighter types in the late 1980s and early 1990s. This included the MiG-29, Mirage 2000 and the heavy class Su-30MKI. The arrival of these fighters diminished the role of this light fighter under development and reduced its priority. 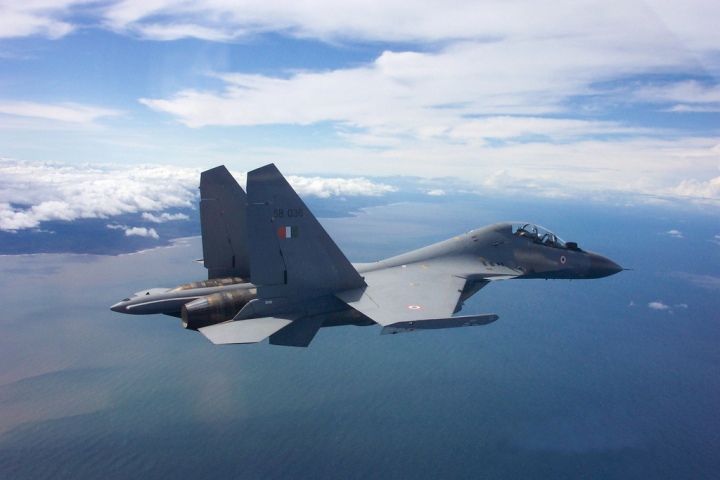 Su-30MKI is the mainstay of the Indian Air Force and one of the most capable fighters in service today.

The Indian defense ministry claimed that the jet would enter service before the turn of the millennium, but a long list of delays made sure that this didn’t happen. The first prototype was rolled out in November 1995 and was supposed to be powered by an uprated variant of the GE F404 engine as the Kaveri was still in its infancy and was not ready to power the LCA, now known as Tejas. India conducted a series of nuclear tests in 1998 and the deals associated with the engine were embargoed by the United States. This delayed the programme even further. The type made its first flight 6 years after being rolled out, ie in 2001. 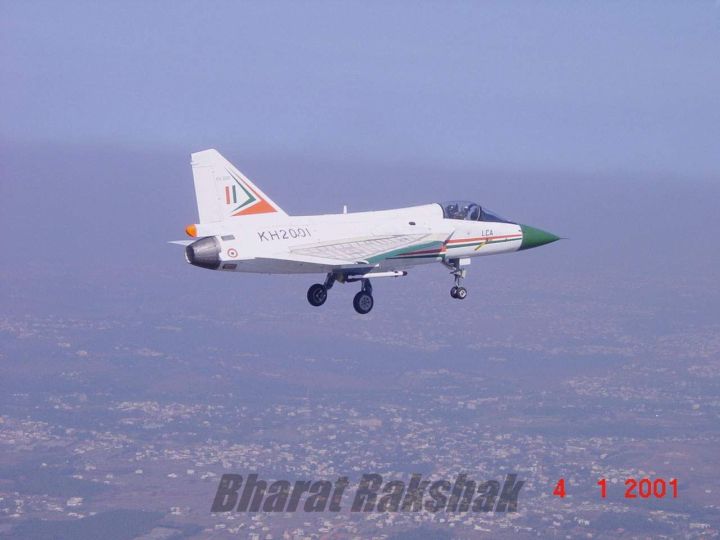 Tejas TD-1 seen during its first flight on 4th of January 2001. (Credits-Bharat Rakshak)

The actual story of JF-17 neither began in Pakistan or China. Its story began in the erstwhile Soviet Union, Mikoyan design bureau to be precise. It started off as a proposed design designated MiG-33 which was essentially a single engine MiG-29. This design was rightfully rejected by the Soviets as they had much more capable MiG-29 and Su-27 entering service in large numbers and a single engine fighter was not desired. This design was sold to the Chengdu design bureau in China in 1995 to support the indigenous fighter programme started by them. 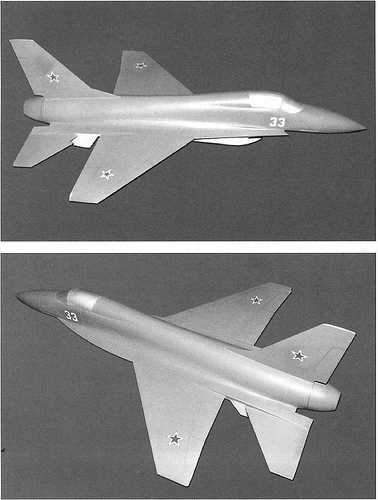 Pakistan and China had started the Project Saber II followed by Super 7, both of which were cancelled after sanctions were placed on China. Both of these programmes aimed at developing a new variant of the F-7, the Chinese copy of MiG-21F-13 in collaboration with Grumman in the US. The Chinese were looking to replace their massive fleet of J-7 (local designation of F-7) while the Pakistanis wanted a new fighter to replace aging Mirages, F-7, Q-5 etc. Thus the Pakistanis joined the Chinese programme in the year 1999 and the fighter was designated FC-1/JF-17. Thanks to relatively developed design Chengdu got from Mikoyan, they were able to complete it quickly, modify it to suite their needs and perform the first flight of the type in 2003. The Chinese are the primary manufacturers as the Pakistanis assemble knock down kits for their airforce. They are moving ahead towards full domestic production. Unlike its Indian counterpart, JF-17 entered service in 2007 and around 50 of these jets now serve the PAF. 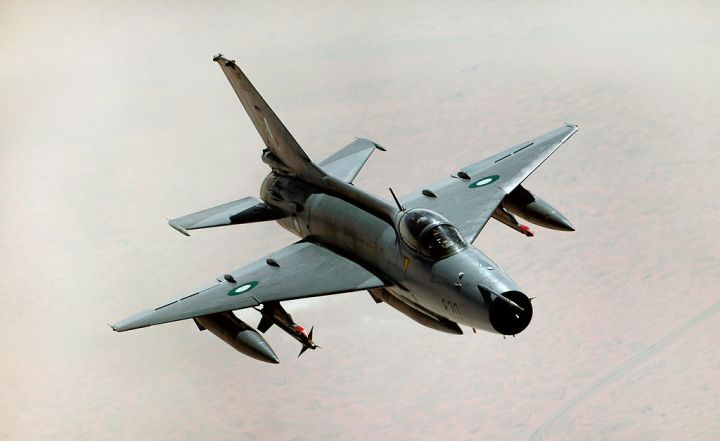 Just like the IAF, PAF also has several squadrons worth of F-7s in service.

Just like the Indians, the priority for this fighter went down over time for the Chinese. They started domestic production of Su-27 family of jets which led to the reverse engineered J-11B family. Su-30MKKs were procured from Russia as well while J-10, a domestically developed jet was under development in the same time frame as well. This is seen as the primary reason for the Chinese not buying the JF-17 for themselves. Again just like the Indians, the Chinese were also lacking in their own engine development programmes thus they decided to use Klimov RD-93 to power the JF-17.

The JF-17 thus ended up with a cropped delta wing with blended LERX. A conventional horizontal tail was provided for controlling the pitch of the aircraft. As the design was supposed to be single engined from the onset, it is powered by a single RD-93 engine a variant of the RD-33 which powers the MiG-29. Its avionics suite will be discussed in the capabilities section below.

The airframe of this light fighter is made up of advanced composites which allows the airframe to be lighter thus adding to the total weight of fuel and ordnance that can be carried. It weighs only 6.5 tonnes when empty while loaded weight is more than double ie around 14 tonnes. It houses the Israeli EL.M-2032 radar in the nose. This pulse Doppler radar also finds usage on a variety of other platforms and can be optimised for a platform specifically. It has been successfully deployed on several platforms including old Mirages and MiG-21s. It is capable of tracking targets both on the surface and in the air with the detection range for a 5m2 airborne target being 150km. Tejas sports a digital fly by wire system, the code for which was tested on an F-16 in the US before being used on the LCA. The FBW allows the pilot to use his jet to its best capability without endangering it.

Tejas loaded with a single R-73, 2 fuel tanks and 3 practice sub-munition carriers with dummy bombs. A Litening pod can be seen just below the intake.

The jet can carry any combination of fuel tanks and weapons on its 7 hardpoints, 6 off which are placed on the wings and 1 on the fuselage. Its maximum payload is 3.5 tonnes which is larger than the MiG-21, the jet it is supposed to replace. It also sports an additional hardpoint dedicated to targeting pods. This jet has been designed to carry western, eastern and Indian weapons. It can carry Russian missiles like the R-73, Israeli missiles like the Python and the Indian Astra. There are chances of Meteor and R-77 being synced with the jet as well. It can also carry a wide variety of air to ground munitions including the domestic Sudarshan which is under development. The Gsh-23, a 23mm aircraft gun is presently being synced with the aircraft and is one of the requirements for the Final Operational Clearance.

Unlike the Tejas, JF-17 doesnt have a composite fuselage but sports an all metal construction. It was done to make production easy and cheap. Successive variants have introduced composites and tried to correct this. The empty weight is slightly higher than the Tejas ie around 6.6 tonnes and the maximum takeoff weight is lower ie around 12.5 tonnes. Its primary sensor is the KLJ-7 multimode radar fitted in the nose. Its performance parameters are slightly inferior to that of its Israeli counterpart on Tejas but it is a capable system. Unlike the Tejas, JF-17 lacks a digital FBW and sports an electro-mechanical system to control the jet. This is one the several compromises made to reduce cost. This limits JF-17’s performance to certain degree. 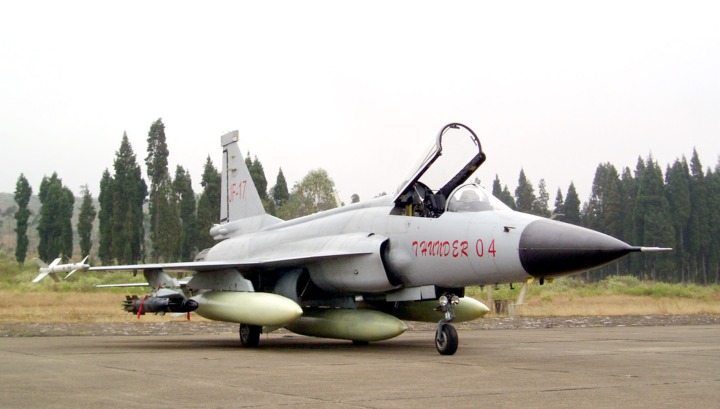 Just like the Tejas, it has 7 hardpoints, 2 wingtip, 4 wing mounted and 1 centerline and the payload is near about same as well. It carries weapons of Chinese origin along with some American weapons like the famed AIM-9. It can deploy the CM-400 AShM which has been claimed to be the primary threat to Indian carrier battle groups. Chinese AAMs like PL-12, PL-10, PL-9 etc for taking out aerial targets.

Both the Tejas and JF-17 are similarly capable aircraft with widely different fates and roles. Both of them have a similar maximum takeoff weight, similar payload, similarly capable weapons, similar range etc. The role they played for their countries is what sets them apart. Tejas will just be the third line of defense for the Indian skies while the JF-17 will form the backbone of the PAF. The secondary roles they play for their nations are actually more important. The JF-17 started the aviation industry in Pakistan just like the Tejas did in India but then the nature of the 2 industries is very different as well. Tejas helped in developing advanced technology which is migrating to other Indian platforms for eg domestic HUD, Tarang RWR, cockpit design, this cannot be said for the JF-17, most of which was developed in China. It must be noted that the Tejas is yet to enter service while around 50 production JF-17s patrol the skies of its operator. The reduction in complexity helped it enter service quickly while Tejas is yet to receive Final Operational Clearance from the IAF. Thus 2 jets with nearly the same capabilities ended up serving different roles for their nations while essentially countering each other.