The Soviets knew that their arch rivals were developing a new nuclear powered attack submarine, first of which will be entering service in the early 1970s. The USN already had an impressive fleet of attack submarines which posed a massive threat to the Soviet navy’s sub-centric operations. To counter this threat the development of a new range of ASW assets was started. This included a new SSN, a new heavy ASW surface vessel, new weapons to kill subs etc. The surface vessel was desired to have advanced sonar and capable weapons to seek out American subs and destroy them. This need led to the development of Udaloy class of destroyers, one of the most potent sub-hunters ever built.

The LA class of SSNs started entering service from early 1970s and were one of the primary targets for the Udaloys.

Soviet navy planned to do what the Germans tried during the first and second World Wars. They planned to blockade Europe using their submarines supported by surface fleet before launching massive land offensives. This meant that Europe won’t get ammo, food and reinforcements from its allies, thus  reducing its warfighting capabilities. For this, they needed a capable fleet of submarines supplemented by an equally good fleet of sub-hunters. The primary Soviet SSN was the November which was superseded by the Victor from the late 1960s. The ASW force included large cruisers along with smaller frigates like the Krivak class. These ASW vessels would deploy as part of large task force which would make sure that Soviet subs could operate without interference from enemy’s surface and air assets. The Kara and its preceding Kresta classes were rendered too big for sub-hunting and too small for leading the flotilla and thus an optimal design was desired.

Soviets felt that the Krivaks were too small to be part of the expeditionary flotillas.

By the 1970s, the Soviets had realized that building massive single purpose vessels was neither economical nor as effective as building larger numbers of smaller vessels. Thus the requirement for a smaller ASW vessel was put up which would operate alongside other vessels. They also started development of an anti-surface warfare vessel which would provide protection against surface threats. This led to the development of 2 vessels, ie the Udaloy which was the dedicated sub-hunter while the Sovremennyy was used for surface warfare.

The Krivak class was one of the important ASW assets of the Soviet navy, but it had several drawbacks which have been listed below.

The development of Udaloy’s design was started by taking Krivak as the base. The displacement was increased to 8000 tonnes so that ample space for all of the equipment and the required amount of fuel was available. It is powered by 2xM62 cruise gas turbines producing 15,000 shp each supplemented by 2x M8KF boost gas turbines producing 45,000 shp each. These powerplants power 2 propellers giving it a top speed of 32kt.

A part of the massive bow array is seen in this picture along with the quad Silex launchers.

The ASW facilities is what make this vessel very potent. It sports a massive low frequency bow sonar array named Polinom. It also sports a towed array sonar deployed from a stern door. To kill the subs, it has 8xSS-N-14 Silex ASuMs (Anti Submarine Missiles). These missiles carry a 4oomm caliber torpedo which can engage submerged and surface targets. The missile is based on the P-120 and flies at high subsonic speeds with a range of 55km. An additional 185kg of explosive is placed in the missile for engaging surface targets if necessary. These missiles are generally used to take out targets at long range . The vessel thus operates alongside a flotilla of other assets, most of which are engaged in ASW activity. Once a target is located, the asset calls in the strike by giving approximate location & heading of the target. The missile is then launched and it delivers the torpedo close to the target. After separation, the torpedo starts its motor and homes onto the target acoustically. These missiles are placed in 2 quad launchers on either side of the bridge. The vessel also carries 2 quad launchers for 533mm torpedoes which can hit targets 15-20km away. RBU-6000 ASW rockets are used for self defense against torpedoes and frogmen while being the last weapon to be fired at a submarine.

The Silex missiles can be seen inside the port launcher in this pic.

The Udaloy sports a Top Plate 3-D air search radar which is used for tracking aerial targets and designating targets for Kinzhal SR-SAM. These SAMs had a moderate range of 12km and give the vessel limited air defense capabilities. These missiles are carried in 8 VLS cells, each of which houses 8 missiles. Four cells are placed infront of the first gun mount whereas the rest are just behind the second pair of stacks. They were supplemented by 4xAk-630 CIWS. The bow also sports 2x100mm guns mounted just in front of the bridge. The stern on the other hand can support 2 helicopters in 2 hangars along with a heli-pad. Helicopters are essential for long range sub-hunting and the primary Soviet sub-hunting helicopter was the Ka-27. It is equipped with sono-buoys and dipping sonar to hunt for subs and medium torpedoes to kill them. It could also call in missiles from an Udaloy if the target was within the range of the Silex missile. 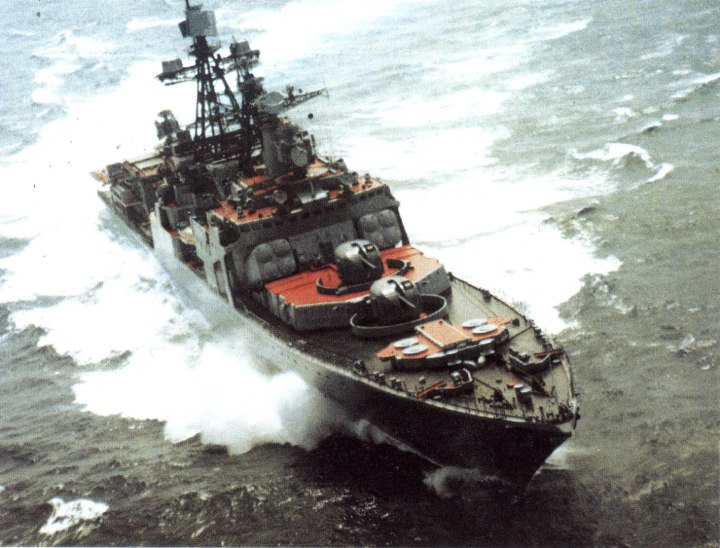 The circular cells on either side of the center line, just infront of the front gun mount are the Kinzhal cells.

This pic shows the stern door and the 2 hangars.

The early 1980s marked another shift in requirements and the Soviet navy now needed a more balanced vessel instead of vessels dedicated to fulfill a single role. The Udaloy thanks to its size was chosen to be the multirole destroyer and an upgrade package was developed. The Silex ASuMs were replaced by Moskits while the 100mm guns were replaced by a twin barrel Ak-130 130mm gun. Its electronics along with the propulsion and sonar systems were also updated. The loss of ASuMs is made up by the capability of launching SS-N-16 Starfish missiles from the torpedo tubes. This variant was designated Udaloy II, sadly only 1 was completed before the collapse of USSR. The Soviets managed to complete 12 of the first type off which 8 remain in service with the Russian navy. They are supposed to be replaced by a next generation destroyer presently under development.

In this pic we see Admiral Chabanenko the only Udaloy II in Russian service. We can see that the Moskit launchers are different from the Silex ones while the bow sports a single Ak-130 gun. (Credits-On the pic)

3 thoughts on “Ships of the Soviet Navy: Udaloy class”