The original Top 5 Carrier article compared USS Nimitz, Admiral Kuznetsov, Liaoning, FNS Charles de Gaulle and INS Vikramaditya. Since the addition of USS Ford, HMS Queen Elizabeth and Shandong would have made it too long for our readers, I decided to split  the articles. This part covers the 3 newer carriers i.e. the Ford, the QE and the Shandong.

1) Size of air wing: The Ford is expected to carry nearly the same amount of aircraft as the Nimitz with a theoretical max being over 100. No other carrier under construction or in service, except her sisters obviously, can carry as many aircraft thus the Ford scores a perfect 10 in this category.

2) Composition of air wing: F/A-18 family carries out almost all roles except those of AEWACs and ASW assets. These will be supplemented and eventually replaced by the F-35C. A soon to be chosen drone designated as MQ-25 will take over the refuelling role. E-2D and Sea Hawks will be operating off the decks for decades to come and have no replacement in sight. Thus the carrier scores a 10/10.

3) Configuration: Like Nimitz, the Ford is also CATOBAR. It sports 4 catapults 2 on the bow and 2 on the waist. It can launch 2 aircraft simultaneously within minutes of another 2 using one each of the pair of catapults at the bow and waist. The issue of the Nimitz, i.e. catapult no. 4 being shorter and space constrained has been solved. The relocated island also allows for 30% more sorties over the Nimitz. The most interesting aspect being that the EMALS have no lower MTOW limit for aircraft launches thus the carrier scores a perfect 10.

4) Propulsion: The Ford gets a 10/10 here as well due to its newer powerplants being able to generate power for supporting all onboard systems easily. The Nimitz suffered from limited power generation, and hence with this article update, they get a point subtracted from the total.

5) Weapons Systems: Ford like Nimitz carries purely defensive weapons payload of ESSM and RAM in MR-SAM and SR-SAM roles. She scores 9/10 in this category.

1) Size of air wing: She doesn’t have the luck of other carriers in the line up. She can carry over 70 aircraft but sadly, the British won’t field that many on the deck. Plans are for 24 F-35Bs and 14 helos. The helos would be Merlins which will carry out ASW, SAR and AEW off her deck. For maximum load out, she gets 8/10.

2) Composition of air wing: The composition has already been covered in the previous section. STOVL deck limits the number of types that can be operated off the deck. Thus the QE gets 7/10.

3) Configuration: While on one hand, her configuration is considered the least capable among the ones known and fielded on the other, she is the largest STOVL carrier ever built. Her 2 islands is considered the best solution for carrier as a forward island is suited for nautical navigation and an aft island is better for air ops. She gets 7/10.

4) Propulsion: She sports integrated electric propulsion powered by CODAG i.e. Combine Diesel and Gas. Such a system is perfect for distributing power to onboard systems while driving the motors which drive the propellers. She gets 8/10 in this category.

5) Weapon Systems: The QE ends up woefully short in this department compared to all other vessels being compared here. She just has Phalanx CIWS for self defense and no SAM systems onboard. This load out earns it 4/10 in this category as she would be nearly helpless without escort.

Even though she is one of the newest in the category, she only earns 34 out of 50. 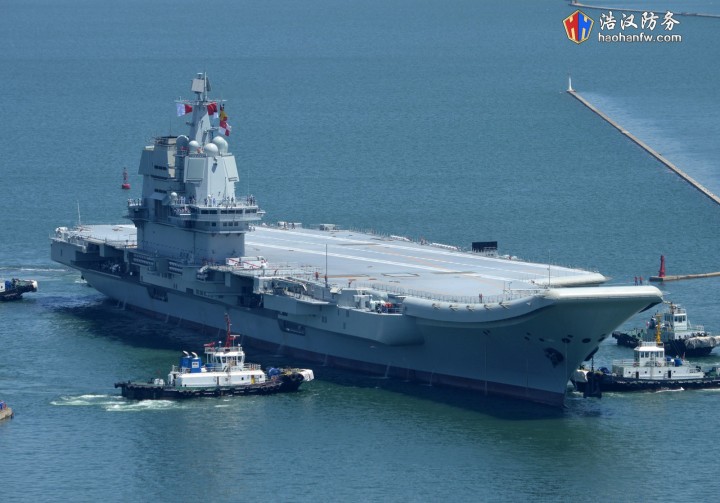 1) Size of air wing: Her design is based on that of Liaoning, itself a modified Kuznetsov class vessel. The base Kuznetsov design could carry 58 aircraft in total, Shandong has some additional parking spaces on the deck thus could carry 3-4 more aircraft. We can expect her to carry 62-64 aircraft at the most. She scores 7/10.

2) Composition of air wing: She would carry the same aircraft as the Liaoning, thus J-15 for air defence, strike, refuelling and EW. The Chinese use Z-9s, Z-8s and Z-18s for ASW whereas a variant of Z-18 is used for AEW. She scores 8/10 in this category.

3) Configuration: Like Liaoning. she is also a STOBAR carrier. Shandong has a smaller island thus getting an extra point for better configuration i.e. 8/10.

4) Propulsion: She probably has propulsion plant similar to that of the Liaoning, thus scoring 8/10.

5) Weapon Systems: She sports Chinese copy of the American RAM alongside Type 1030 CIWS which is nothing but a beefed up Goalkeeper CIWS. She has no offensive capability and no MR-SAM system, thus scoring 6/10.

The status of Top 5 carriers among the ones fielded has not changed significantly. The Ford displaces it American compatriot Nimitz to take the top spot with CDG getting the 3rd followed by the Russian aviation cruiser Admiral Kuznetsov. The newer Shandong scores more than Liaoning thanks to a better deck. HMS QE is a slight let down. She is the least protected ships in the lot while scoring decently in the other categories. Scores have also been updated to show the design disadvantage of Vikramaditya and better SAMs on the carriers.

One thought on “Top 5 Carriers Part 2”